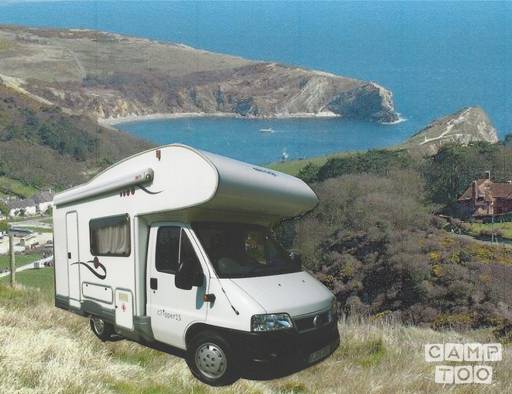 Add dates for the exact prices

Do you like what you see? Book fast: 77 people viewed Melvin's camper in the past two weeks

Ideal for a family with seat belts for all passengers. Easy to drive with a full set of facilities including a heated shower if needed. It comes with a small outside table and 4 chairs to sit outside when needed. After booking with Camptoo contact DayInsure directly to arrange InsuranceTel: 0333 005 0944 Email: support@dayinsure.com It also has a TV and DVD player with a reception booster on the roof if the kids want to relax on rainy days. It is a much-loved family motorhome we have used for our own holidays for a number of years. Please note a previous hirer drew our attention to some repairs required, all of which now have all been successfully dealt with. For example, the sink and shower tray has been professionally renovated as can be seen in our advert photos.

This is our family motorhome please keep clean tidy and treat with respect. YOU PERSONALLY will need to insure my motorhome on a daily basis with DayInsure. Camptoo will also explain further if you contact them. ONLY A BRITISH DRIVING LICENCE IS ACCEPTED. No pets or smoking is permitted.

The deposit for this camping vehicle is £1,000. The deposit will be returned to you after the rental period.

It is possible to reduce the deposit to £350 by taking out excess risk insurance through Camptoo.

Rented out by Melvin

Melvin is an extremely nice guy and did his very best to resolve the problem we had which included him driving to our location, a 5 hour round trip. His communication was very good and he was very accommodating when it came to picking up and dropping the van off. He did a thorough handover and tour of the van. We had at least 1 tank of gas and the other was nearly full. Unfortunately, the motorhome did not meet our expectations. I knew that the van was not brand new but the photographs on this site did not reflect the actual state of the van. On picking the van up I was very disappointed at the look and feel of it but it was too late to cancel as this was our family holiday and we had sites booked and family to visit. The sink unit in the bathroom is cracked and had a hole in the sink and this was covered by waterproof tape which is not the most hygienic fix. The shower tray was cracked, and you could feel a squelching of water from previous use which was unpleasant. The interior of the van was showing its age which is reasonable, but it had a grubby feeling to it. The hob cover had been replaced by a plywood cover and whilst we had no problems, I am not sure that wood is a suitable replacement so close to a naked flame. After driving for just over an hour the left-hand indicator became defective, and I replaced the bulb but that was not the problem. I then discovered that the brake lights were not working either. I contacted Mel and he suggested visiting Halfords and he would reimburse me. Unfortunately, Halfords could not help and as it was late afternoon, I did not want to be stuck in a Halford's car park overnight. I drove onto our first site next to Silverstone. I contacted Mel on arrival, and he agreed to drive up from Gosport early the next morning a 2.5 hour journey. Mel arrived as arranged and fixed the problem. Our second site was on uneven ground with the van tilting a little forward and a constant trickle of water was discovered coming into the dining/sitting area/sleeping area. On investigation I guessed that it was coming from underneath the shower tray, but I am sill unsure as it was constant. The radio in the cab did not work which though a small thing was inconvenient as phone data had to be used for music on the long drives between sites. We decided to cut the holiday short as we did not have complete confidence in the electrics and the leaking water was also a concern. This decision was not taken lightly as we had arranged to visit family further up the country and had paid for another site and lost that money. I could not in recommend this van to someone else.

An amazing experience which we couldn’t have without the help and support of Melvin, who was very informative and helpful. The Caravan is very comfortable and complete with everything we needed. I would definitely hire again from Mel and use Camptoo. Joao

Apologies for late review, we had a great time whilst using this motorhome it is very reliable. Don't expect brand new glamorous interior , but Melvin would tell you that himself. Melvin was very helpful before our trip and is always there to help or answer questions. Definately recommend

You can park your car here for free

Add dates for the exact prices

Do you like what you see? Book fast: 77 people viewed Melvin's camper in the past two weeks